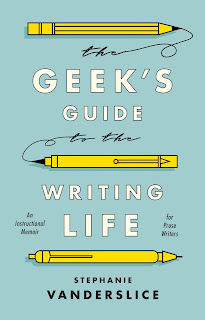 The name Stephanie Vanderslice often comes up when discussing best practices for teaching writing. I’ve happily hosted her here on the blog before, and am pleased to welcome her back. Her latest book, The Geek’s Guide to the Writing Life, is chock full of solid, writer-tested, smart, and innovative tips on living a writing life in the 21st century. Stephanie holds an MFA in fiction writing from George Mason University and now directs the Arkansas Writer’s MFA Workshop at the University of Central Arkansas.

I originally put the book, Rest: Why You Get More Done When You Work Less, on my reading list last summer because the title was so tempting, because I am a victim of the modern culture of “busyness” as much as anyone else, and because I thought I might find in its pages the secret to managing my time.

Instead, what I found more than anything else was a history of artists and the creative life over the last several centuries, a history with a surprisingly common thread: walking.  Walking, or some kind of meditative physical activity undertaken without distraction, without trying to multitask or do anything else but put one foot in front of another.

I was astonished to learn how important walking had been throughout history, how many of the world’s great writers and artists have been walkers. Jefferson, Kierkegaard, C.S. Lewis. Alice Munro, Barbara McClintock (Geneticist), Lin Manuel Miranda. They all got their best ideas walking.

I am no stranger to physical exercise. I ride for miles each week on a stationary bike while staring at my Kindle or reading a magazine, and I power walk around my neighborhood while listening to podcasts. Anything to keep my mind occupied, because even though I’ve exercised for 30 years, I still find it pretty boring. 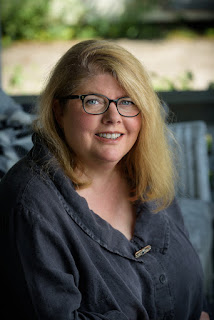 The kind of exercise advocated in Rest was different. The kind of physical movement that inspired the creatives of the past was exercise for its own sake. It was supposed to be boring. That was the point. As Danish philosopher Soren Kierkegaard reveals, “I have walked myself into my best thoughts.”

After reading Rest, I became so enamored of walking that I first began scheming to make my commute to the university where I teach on foot—a 20-minute prospect each way—but the problem of figuring out what to do with all the stuff I’d need to schlep back and forth persisted. In the end, I decided to start smaller, with a 45-minute neighborhood stroll after my morning writing sessions. The new caveat: headphones not allowed.  I had to give my mind as much freedom to roam as my body.

The results have been impressive. Each walk has ended with so many writing ideas, especially development ideas for my novel-in-progress, that I quickly had to start a file called, “walking ideas,” to keep track of them. Moreover, I am learning not to pressure myself on these jaunts, telling myself that my mind can go wherever it wants, even if that means perseverating on what I should have said at yesterday’s faculty meeting. Still, I have yet to return home, even on the most stressful of days, without a revelation about something I was writing.

It’s not just Rest that’s onto something. Recently at a reading at my university, a student asked renowned poet Maggie Smith how she generated her ideas. “Put your phone away and take a walk,” she said.

No wonder the Romantics spent so much time wandering the moors. So, while Rest (the book) has not necessarily granted me an extra hour a day or helped me maximize my REM sleep, it has changed my creative life. See for yourself—read Rest and give the “daily constitutional” a try.

Email ThisBlogThis!Share to TwitterShare to FacebookShare to Pinterest
Labels: Geek's Guide to the Writing Life, psychology of writing, Rest: Why You Get More Done When You Work Less, Stephanie Vanderslice, writing and walking, writing process, writing routine, writing tips 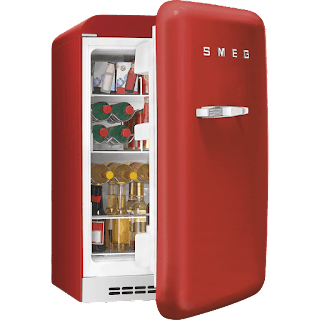 > Do you hedge and cower in your writing, using a lot of qualifier words and unnecessary amplifiers? Jessi Rita Hoffman has some notes for you, via Jane Friedman's site.

> On Tiferet Talks (podcast for Tiferet Journal), Gayle Brandeis, author of the memoir The Art of Misdiagnosis, chats with one of my former mentors, Leslea Newman, author of the poetry book, I Carry My Mother, and many other significant works, including A Letter to Harvey Milk and October Mourning: A Song for Matthew Shepard.

> Many writers who have put up posts and articles on Huffington Post since its inception have hoped the site would wake up and end its non-paying policy; instead, HuffPo will simply stop publishing any outside contributors.

> Anyone else love dissecting short works by looking at their opening and/or closing lines in isolation? In this post, the editors at Brevity are luring readers in with the first lines of essays published in their newest issue.

> The NBCC (National Book Critics Circle) has announced its 2017 Award Finalists in advance of the March 17 presentations.

>In the category of Print-This-Out-and-Give-It-To-a-Non-Writer-Friend, Leslie Pietrzyk notes all the ways to help a writer.

> Finally, this one's just for my New Jersey/NYC/Eastern Pennsylvania writer friends: looking for a relaxing place and atmosphere to disappear for a day and write? Check out next Saturday's Cedar Ridge Writers Series mid-winter retreat. 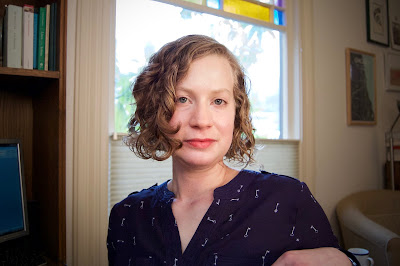 I guess in the past debut authors talked in person about the trajectory hurling them toward launch day—and the rolling emotions and endless details that accompany that journey. Today, we find one another in specialized Facebook groups and exchange intel. That’s how I got to know Anca Szilágyi.

Anca is the author of the newly published novel, Daughters of the Air, which Shelf Awareness called “a striking debut from a writer to watch.” Her writing appears in Salon, Los Angeles Review of Books, and Lilith Magazine, and she will be teaching Writing Contemporary Fairy Tales at Portland (Oregon’s) Literary Arts and with StoryStudio Chicago while on book tour. She received the inaugural Artist Trust/Gar LaSalle Storyteller Award, and earned grants and fellowships from Vermont Studio Center, 4Culture, Made at Hugo House, and the Jack Straw Cultural Center. Originally from Brooklyn, she currently lives in Seattle.

When I was just starting to write seriously, I fetishized notebooks—and, like an eight-year-old—stickers.  I preferred black, hard-backed notebooks with graph paper that forced my writing into small, neat boxes.  My favorite treat was popping into a stationary store in Cobble Hill, Brooklyn, to buy a cheap book of Dover Art Stickers depicting famous paintings by Michelangelo, Kahlo, Goya, and the like. I was trying to write the first draft of my first novel, Daughters of the Air, using Hemingway’s supposed model of 300 words a day, no more, no less, stopping mid-sentence and all that jazz. The mid-sentence idea was cool; there’s always something to come back to. (And if you didn’t remember what you were coming back to, maybe it wasn’t all that good to begin with.)

Aside from the word count, I didn’t have a very language-oriented approach to writing, which, come to think of it, is kind of strange. I don’t like complicated writing prompts. (Write a dialogue between a mother and a cat. The mother should be in a sour mood saying sweet things, and the cat should be doing something that is both like and unlike a cat. Include the words mousse, temperament, and proclivity.)  In addition, the blank page was your typical blank-page nightmare, even with all those calming blue gridlines. So, in came the art. I would shuffle the stack of sticker books with my eyes closed, randomly open one and choose a sticker. Then came joy, disappointment, or bafflement at my selection. The tiny reproduction took up a square of space on the page, and then I had to write. Whatever came to mind. Hopefully related to the book. Sometimes not. 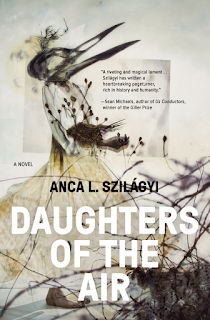 The really famous painters oozed their egos all over the page. I had little to say about Michelangelo. Kahlo demanded I only write about Kahlo. Which is fine, because I love Kahlo, but my novel has nothing to do with her. It was the lesser known painters, to me at least, that gave me an opening. Sad, dark flowers by Nolde. Chagall’s gold-hued and green warmth. Modigliani’s eyeless women. Kandinsky’s colorful abstractions, suggesting messy, unarticulated internal conflicts.

Over time, Nolde faded away, but Chagall fueled the father in my novel, Modigliani the mother, and Kandinsky their daughter, Pluta. Through all this groping in the dark with my shuffling, I learned to return to these three artists in particular. (Goya dropped in sometimes.)  In retrospect, I can see how these painters shaped the novel’s characters in personality and to some lesser extent, their biographies.

The father in my novel is warm and is an Ashkenazi Jew. Modigliani didn’t paint eyes as he felt they were too intimate, and the mother in my novel is cold and distant. And, like Modigliani, a Sephardic Jew. (These two demographic tidbits also aligned with the Jewish cultures of Buenos Aires I had been researching.)  Writing from Kandinsky’s works was a special challenge (no gestures, no objects), but somehow, they suggested a path for my protagonist, Pluta, in her emotional and actual journey: messy, indirect, all scribbled up.

When I finished the first draft, this ekphrastic process gradually fell away. The raw material was before me, and it was time to make sense of it. A couple of reviews have called my book surprising (in a good way, thank goodness), and I think in part the surprising quality came from the experiment of engaging with art in this way.

It was hardly the most efficient way of writing a novel. That first draft took several years, and then I went to graduate school and rewrote the book. But I’m not sure efficiency is something we should necessarily value in art. It’s art, after all—not paint-by-numbers. Even as it is painful to grope around in the dark looking for the shape of a story and its meaning, even as it could take longer—much longer—than you would expect—if it wasn’t a surprising process with surprising results why would I even write?

You can find Anca at her website or on Twitter. Her book tour is taking her to Bainbridge Island, Spokane, Portland, Boston, New York, Chicago, and Tampa (for AWP) this winter, with additional spring and summer West Coast events, all listed here.
Posted by Lisa Romeo at 7:30 AM No comments: