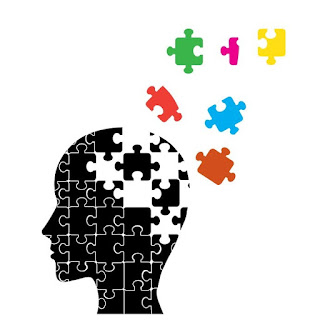 Much of my teaching of writing work is grounded in creative nonfiction, and especially writing memoir. In workshops and classes, we never run out of topics that are worth thinking about, discussing, studying in published works -- and sometimes, complaining or venting about!
Into that last category so often falls the subject of memory and how often we are vexed and perplexed by its unpredictable nature. One day, we sit at the keyboard or notebook, and our fingers fly, fueled by churning, detailed memory that seems almost unstoppable, offering up voluminous details, vivid visuals, sharp and full lines of remembered conversations.
We recall with certainty the weather on a particular day, the clothing we wore, the way a loved one cocked their head, the inflection in their voice. Without thinking almost at all, we're describing the furnishings of a room down to the smallest bit of bric a brac, what the house smelled like, the lilt of a particular birdsong that drifted in an open window. The way we felt, what we thought, our hopes and fears at that moment in past time are as close and clear as if it all occurred yesterday.
And when that happens, bliss. Memoir seems to write itself.
Then, there are some other days. Or perhaps I should say, most of other days. The memoir writer's page remains blank, not for lack of ideas, but because those memories float just out of reach. We remember some of the event, but not all. We can't be sure if so-and-so said this-and-that, and if they did, was it in fact, on that day, at that moment? Where, exactly, did the interaction take place after all? And was it before or after some other event?
Elusive, spotty, incomplete memories are something with which every write of creative nonfiction -- memoir, personal essay, nonfiction narrative -- must learn to cope. Recognizing the fallible, hazy, unreliable nature of memory has caused many a memoir writer to push their project to the back burner, or abandon it completely, in the belief that memoir writing is reserved only for those with a stellar memory.
To which I say: nope.
Yes, you can write memoir, even if your memory isn't great.
In fact, that's the title of a post I wrote this week for the blog of the New York Open Center on this very topic. I'd love to share it with you. Here's an excerpt:

No one recalls everything with precision. When I wanted to know more about how memory works, I began researching and studying. Three of the most profound things I learned and which have significance for the memoir writer are:

1.       It is impossible for the average human brain to record with total accuracy even something that happened just minutes ago

2.      Our current memory of a past event is influenced by the stories we’ve told (and heard) over time about the original event

3.      The act of remembering itself often begets additional pieces of related memory (Great news! The more you write about a particular memory, the more you might retrieve.)

This all suggests that even if my memory were better, I couldn’t rely on it completely anyway. Once I understood this, my writing opened up. Without the grinding pressure to be “right” about every remembered detail, I began to regard my own initial memories as a starting place for writing memoir, but not as the only resource...


You can read the full article here. 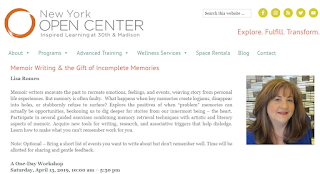 And if exploring the relationship between memory and writing memoir is of interest, I'd love you to consider my day-long workshop on the subject at the Open Center in Manhattan on Saturday, April 13.