An (Unorganized) Room of My Own

Over the years, I’ve been told by well-meaning friends and business colleagues, "you're the most organized person I know.” Truly, I cringe when people say this. Though they are probably talking about being mentally organized, I always hear it as being physically organized. And that's the problem.
First, because it’s certainly not true. Second, because I don’t aspire to it. Third, and most important, because I don’t consider it a compliment.
Taking these three objections in reverse order:
(3) I have always equated extreme organization with negative characteristics -- being closed-minded, dull, lacking in curiosity, creatively stuck, and a lot of other not-so-great traits which of course intellectually I know cannot be so easily assigned to all organized persons. Still, you can understand how the “most organized person I know” comment would drive me a little crazy. And feel more like a judgment than high praise.
(2) I don’t particularly want to be that organized; I always wanted to be creatively quirky (see above), and I suppose to rebel against an upbringing during which I constantly heard, "put that away," "get this out of here," and "why is this here?" So I've sort of become someone for whom once physical objects are neatly and logically stored away from sight (a file folder, notebook, photos, book), they are forgotten. The notes on a potential new essay? Once inside a folder, tucked in a drawer, will easily slip from the part of my brain where urgency resides. (Funny how this does not seem to happen when I slip the secret stash of peanut butter fudge behind the seldom used condiments in the back of the basement refrigerator, but I digress.)
(1) It’s not true. I am NOT as (physically) organized as people seem to think based on other factors. See for yourself. These photos are of my a few areas of my office as it appears this morning. And yes, I do realize how extremely lucky I am to have this generous and private room of my own, and the guilt over how I've let it get overrun is huge. 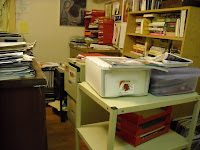 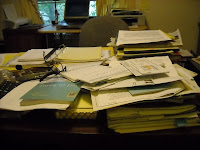 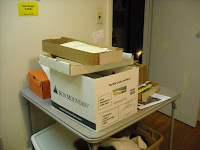 Oh, I can find what I need; but often it goes like this: Let’s see, the last time I saw that proposal/clipping/notebook/magazine/business card was when we had that barbecue and I showed it to Mary along with the advance copy of such-and-so's book, so it’s probably on (or near) the shelf where I keep ARCs. Or not.
So you can see how my leave-it-all-out-where-I-can-see-it methodology can be a time-waster, and frankly, visually annoying. Which is why over the next week or so I am going to make a major organizational assault on my office. To keep myself accountable, I will post the “after” photos.
As for why so many think I deserve a medal from the Organization Olympics, maybe some folks mistake other characteristics for organization, such as being punctual and prepared, being well-researched and curious, having a good memory and keeping copious notes, planning ahead and anticipating problems, being resourceful and asking enough questions to amass a mass of both useful knowledge and useless information.
Not that I’m all those things. But toss a few of them together, along with a tendency to be rather intolerant of disorganization in others, and maybe that’s where the overly organized label derives.

So I'm asking – what are your best tips for organizing the office of a writer/editor/consultant/teacher? Obviously I need them.

Update: The after photos and post are here.
Posted by Lisa Romeo at 10:00 PM

Ugh, don't ask. My office looks like yours. I like to believe a little external chaos is the sign of an internally ordered mind. At least that's what I tell myself.

Your "before" pictures are significantly better than I expect my "after" pictures to look like. Maybe we should have a contest of the best before and after office cleanup pictures. Perhaps that would inspire me.

No tips but I love your office. It makes my office feel less alone.

OK...I had to de-lurk for this one. You just gave me all the permission I need to be the disorganized slob I am and not the neat freak the magazines extort me to be. Yay! As for organzizing, I scrunch my writing life into a small table in the corner of my bedroom (which doubles as a sewing table), along with books piled on my nightstand, and writing supplies stuffed in a tote bag so I can write on the go...