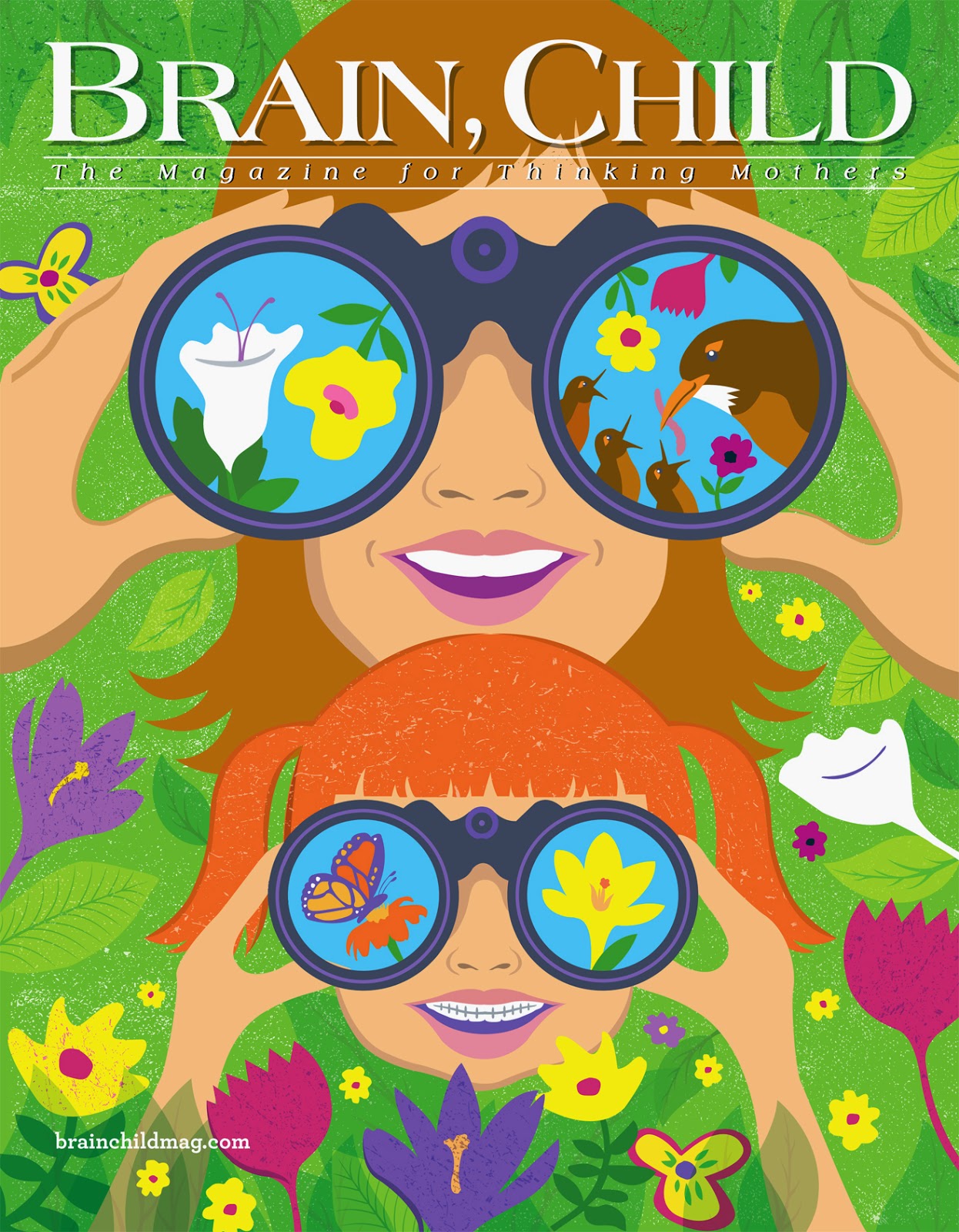 In Summer of 2012, many readers (and a huge swath of writers who value paying markets!) were upset to learn that Brain, Child: The Magazine for Thinking Mothers, was closing after 13 years publishing intelligent essays and fiction about modern parenting. (The ad-free magazine was often called "The New Yorker for mothers.") Its two founding publishers/editors were moving on to new stages of life and work (Jennifer Niesslein now edits an essay site, Full Grown People, and Stephanie Wilkinson established a farm-to-table restaurant in Lexington, VA.).

Just when most were resigned that yet one more print magazine was gone forever, Connecticut resident Marcelle Soviero, owner of Erielle Media LLC, purchased and revived the magazine, which is now published quarterly, plus one special teen issue per year. Soviero, a memoir author, essayist, former executive at several tech start-ups, and writing teacher, has also redesigned the magazine, expanded BC's online presence, added a Brain, Mother blog, and just recently published  a book of essays written by many of Brain, Child ‘s bloggers. Last week, I asked Marcelle a few nosy questions. (Disclosure: I am an occasional freelance editor for the magazine, helping writers to revise essays and short stories.)

Lisa Romeo:  Many people (myself included) were thrilled when you re-launched Brain, Child magazine. I believe many longtime subscribers stuck with it. Were you worried about the first issue you published being accepted?

Marcelle Soviero: Our subscriber base has grown significantly in the last two years, so that is a good thing. I worried about the first issue, but I worry about every issue – that it is the best it can be and stands up to our mission of publishing the highest quality literary magazine available.

LR: Had you always wanted to run a magazine, or was buying Brain, Child more a matter of, "Someone ought to keep that magazine going," and then taking the plunge?

MS: I always wanted to run (or be an editor-in-chief) of a magazine since my first stint as an editor of Popular Science.

MS: My big push was to update the design of the magazine, to add poetry, to produce an expanded digital version, and to grow our online and social media presence. We kept the Brain, Child departments the same but created icons for each department in the print issue. And we’ve commissioned many new artists. My goal was to capture the feeling of the essay with the art as well as the words. In our digital issues we offer bonus content not available in the print edition, and we plan more and more of that in the future.

LR: I'm thinking there has likely been some inevitable backlash to some of that evolution?

MS: We received the 2014 award for best overall design of a literary magazine from Boston Bookbuilders, which was a nice validation of our effort and the efforts of our amazing Art Directors Mike Lombardo and Nancy Anderson. We’ve received so many letters from readers saying how much they love the updated, redesigned magazine and our website and social media readership has grown exponentially and our digital products are selling really well. I can’t complain. 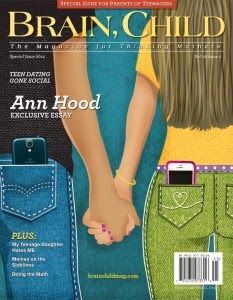 LR: You have been working hard to develop the BC web presence and spread the BC "brand" across social media platforms. Can you talk about some of these ventures, and why and how that's helping to support a subscriber- and newsstand-supported print magazine in 2014?

MS: We’ve decided for the most part not to include ads in the magazine for now to preserve the editorial quality and look of the magazine. We do however save space each issue for a pro bono ad for a nonprofit cause we care about. We are really fortunate in that our subscriptions support the magazine.

LR: One interesting partnership is the cross-posting of some BC content on the Huffington Post. Obviously, this brings BC to the attention of thousands, perhaps millions of readers who might otherwise not know of it. What are the residual effects of that, and is it something that your writers have embraced?

MS: We work with Huffington Post, Mothering.com, and other select content partners to expand our reach and showcase our writers. We’ve helped our writers republish their work as well, in places like The Washington Post, UTNE, and Babble. Writer Rebecca Lanning showcased her Brain, Child piece "The Nap Year" in The Washington Post; Catherine Buni just republished an abridged version of her Brain, Child feature story “Conversation Starters” in The Atlantic. And I was fortunate enough to see Claire DeBerg perform a shorter version of her Brain, Child essay “Finding Gloria” as part of Listen to Your Mother 2014 in Minneapolis.

LR: Many writers covet a byline in BC (because of its reputation and cache, and also because it's a paying market!). Can you give a peek inside the editorial process?

MS: We have an editorial team who read every submission. We receive several hundred submissions a month. We publish 20 short pieces on the blog, 8 - 10 pieces on the website monthly, and 6 - 9 pieces in the print magazine quarterly. In addition we have special issues that offer additional paid opportunities for writers. We receive submissions on an ongoing basis. Our submission guidelines can be found here. I like essays that tell a unique story or take a new angle on a common topic. I personally look for strong dialogue that moves the story along while characterizing the speaker.  And I am in love with metaphor.

LR: Can you tell me more about the Brain, Mother blog, another paying market for writers?

MS: Brain, Mother has given us the opportunity to publish more great work by incredible writers. Senior editor Randi Olin, who joined me two weeks after I bought the magazine, manages the blog and makes sure the posts are thoughtful and tackle topics mothers care about. We look for a wide range of voices and edit every piece.  One of our contributing bloggers, Lauren Apfel, just won a BlogHer award for her outstanding op-ed pieces.  We pay our contributing bloggers, those who post for us regularly. (Blog guidelines are here. - LR).

LR: Though the tagline for BC, has always been "The magazine for thinking mothers," do you run pieces by fathers and others in parenting roles?

MS: Yes. We’ve had plenty of essays by fathers – the amazing Jon Sponaas is a contributing blogger. Jack Cheng, Joe Freitas, and a dozen others have written for us. We welcome male voices, and we are not shy about showcasing voices from all types of families all over the globe.

LR: What's in the future for BC?

MS:  We have more books and special issues underway (we just published our first book -- This is Childhood: Book & Journal), audio and video programming are in the works, and some terrific partnerships.

LR: Has publishing the magazine turned out to be what you expected?

MS: It has been better than I ever expected. Outside of marrying my husband and raising my five children, buying Brain, Child is the best thing I ever did. I couldn’t be happier.

LR: You've published one memoir yourself, An Iridescent Life. Are you working on another book length project, or has the business of running the magazine left little time for your own writing?

LR: I think contributors like to hear that you are also "in the trenches," so to speak, trying to find time in your busy day to work on your personal writing project(s). Any advice in that area?

MS: For me it was important years ago to cut out TV time and also wake up really early. I enter writing times into my calendar, and I never miss an appointment with myself. Last, if I have an engagement (lunch with a friend for example) and it gets cancelled, I steal away and write for that time instead. And I always have my notebook. I’ve written many an essay while in waiting rooms, or at sports practices!

Note from Lisa: One blog reader will win a free one-year subscription to Brain, Child magazine, as well as a full set of 2013 issues. To be eligible for the random drawing, just leave a comment here on the blog by midnight, Tuesday, June 3. (Must have a U.S. postal address.)

I just read my first copy of Brain, Child and loved it. Thanks for the interview!

I published something with Brain, Child several years ago, but I didn't know they had someone new at the helm. Having trouble keeping up with all the magazines out there, but I'm interested to check them out again! Thanks, Lisa.

Thank you, Lisa, for the insightful interview, and Marcelle, for taking the time to share your story...

Lorri - you've won the subscription and back issues. Please send me an email (link in left margin of blog), with your postal address. Thanks.

I am sorry I missed the contest, but I still wanted to leave you a comment that I loved this interview. It had the feel of getting inside information about the workings of a wonderful magazine. Great job (again) Lisa!