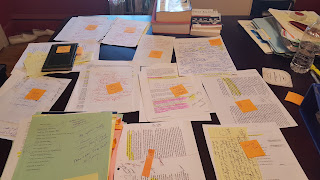 This is the second in a series, following my memoir manuscript from contract to published book.

Late May and most of June were dedicated to final revisions. I happen to love revision; that precious second (third, two-hundredth!) chance to work on precision, so the reader will understand what I'm trying to say, describe, recreate. Making sure I do, too. And, in the process, often discovering new, perhaps tiny but crucial points.

As I mentioned in the first installment, the best part about making those revisions was being deeply immersed in the world of the book for weeks. This allowed me to be more curious about things I'd already written. Now, I could think more about those events that helped shape the narrative and ask myself additional questions. Was there anything new to learn, to weave in?

The memoir's main story is about my reconnecting to my father after his death, while I was in the middle of marriage, motherhood, and an MFA. Several important flashbacks and backstories though also come into play, helping a reader understand how Dad and I once interacted earlier and the particular world we occupied.

The memoir writer works hard to recreate that vanished world. I'd thought I'd done that—and where I'd struggled, my earlier beta readers had pointed out where more work was needed, and I'd attended to it months before. And yet, coming back to the manuscript again, I saw places where that world wasn't quite as clear as it could be. The revision recommendation notes from my publisher highlighted a few areas I thought were done, done, done.

At first, reading some of those revision recommendations, I had a sense of "Nah, don't think so." But when I let the ideas settle in my head for a few days, I realized it wasn't about anything being "wrong" with the manuscript. Instead, these were opportunities for better clarity and richer storytelling.

For example, I was urged to write more scenes about our family's first class travels when I was a child and teen, as my father's income rose; to introduce and develop the character of my childhood BFF earlier in the text (she frequently traveled with us and still figures in the story 40 years later when Dad dies); and to expand the material about my life in the competitive world of horse shows (which my father financed).

As I re-read and re-read the manuscript—three times through, with pencil, sticky notes, and highlighter in hand—I saw where there were still openings and that filling them would only enhance and deepen the story, more effectively inviting in readers who'd otherwise have no means to visualize certain events and understand their emotional significance. 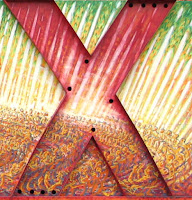 Then, I began addressing each of the revision recommendations I had agreed to. (A few, I had successfully argued against.) Some of this involved excavating original draft pages from the files, locating notes I knew I once made but didn't use the first time around, to get at the needed information (hence, the many piles and sticky notes all over my desk, above).

First, I "fixed" easy things—deleting bits of repetitious material; fleshing out a secondary character; clearing up one chapter's confusing timeline; smoothing a few tense shifts; moving a couple of passages into places that made more intuitive sense.

Next, I concentrated on writing new material. A vintage postcard triggered a flashback about the Las Vegas hotels we stayed at long before my parents built their dream home and retired there. Paring a section about my father's smoking led to a new passage about how I once smoked to mask feeling like an outsider in the rarified air of horse shows populated by heiresses.

When I set out one morning to write a scene from our family's grand European tour when I was a nine-year-old, what emerged were a few sweet and loving exchanges between me and my father I hadn't thought of including—and which became the new prologue.

As I wrote more about my BFF, I asked her over for coffee, so she could read some new material—and as we talked, I learned something I wasn't expecting, and that information helped me round out an altogether different paragraph that had been bugging me. I asked my sister to read some pages and fill in small details of family history that perked up a few sentences. I worked through with my husband a chapter that peeks behind the curtain of some private marriage and in-law moments.

Doing all that and seeing how much it improved the manuscript gave me the emotional fortitude to take a long, second look at how I'd written of my relationship with an often prickly family member with whom I was often at odds. In a sense, I took myself back to Memoir Writing 101: Don't Be a Victim on The Page. I had to ask myself how much of this other person's behavior and its effect on me was, in some respects, about me, not them. 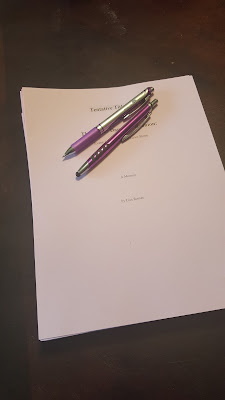 Along the way, I noticed how several things could be improved with a simple red line—a big X through sentences, paragraphs. Some became irrelevant in light of new, better material. Some became redundant as other areas grew in depth from revision. Though I preach it often, I was reminded yet again that DELETE is not only an option, it's often a friend.

Once I felt the revised manuscript was in top form, I asked my husband and elder son to read it in full, for the first time. They each had a few good suggestions that made their way into (or out of) the book.

Finally, I proofread. And proofread again. Prepared the manuscript in the exact format the publisher requested. Held my breath, and hit SEND.

Days later, I found a typo. I marked it on my hard copy, which I'd printed on pale purple paper. Just because. I didn't panic because I'd learned well already: writing is solitary, but publishing a book is purely collaborative. I'm looking forward to working with my copy editor.

Good job! What comes to mind as I read your post was that writing is a lot of work but you are enjoying it. That's wonderful. It's so fun when we see progress in our work. Hope you are close to finishing!

p.s. I meant finishing the whole project! I realize you said your work is off to the copy editor.

Thanks, @ThinkWriteInspire. Lots of work done...lots still ahead! Thanks for reading!