Guest Blogger Tom Mallouk, on Writing Poetry (or anything) and the Joy (!) of the Workshop 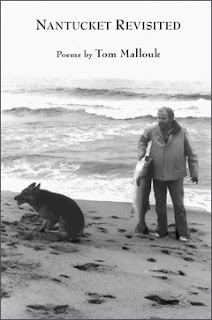 In June, I met poet Tom Mallouk, not on the relatively small territory between our respective New Jersey and Pennsylvania homes, but hundreds of miles north at the Nantucket Book Festival, which makes some sense since he's spent time on the island for many years. Tom was there to introduce his poetry book, Nantucket Revisited (Antrim House)

When I asked him to contribute a guest post for my blog, he demurred, but then wrote back, "Here's a poem I've written addressed to other writers, designed to entertain my comrades and offer a humorous perspective on the writing and workshop process for poets."

I think it applies to any writer, poet or prose, who has sat in a workshop.


To My Fellow Writers

I want you to feel about this poem
the delight I feel about every poem
shortly after I write the first draft.
Before the workshop points out the clichés,
hackneyed metaphors or I realize it’s the same poem
I’ve been writing for thirty years.

It’s the feeling of the rush of new love
and, the cliché notwithstanding,
that’s not just a metaphor.
Neuroscientists maintain connections
suffuse the brain with flush
inducing chemicals like serotonin
and others with too many syllables
for a respectable poem

If I could spare you
that cold slap of embarrassment
and regret that gets you hunched over
the manuscript wondering what you were thinking,
comparing this to the transformative
dream you scribbled illegibly in the leather
bound notebook you keep
by the side of the bed to remind yourself
you are a writer, the dream
that has slipped away like wet
spaghetti down the drain
of your unconscious mind, I would.

But wouldn’t you persist in reworking
every line, creating a narrative subplot,
pruning each excess syllable as you chip
away at this unwieldy hunk of rock, believing
in its essential beauty, believing something
that started with such promise can’t possibly
belong in the scrap yard of broken poems.

You could abandon it like a movie star
ends a marriage, hoping
the next time the stars will align
or you can recommit to the toil of a deeper love
where you question not just the words
but yourself, where you open yourself
to the life of the poem, surrender to it
and love it not for what you want it to be
but for what it is trying to become.

But in any case I want you to believe,
as I sometimes do, in the afterglow
of verbal love making, that I’ve penetrated
some barely perceptible fissure
in the otherwise seamless marble of meaning,
a fissure that has been staring out
into the existential abyss waiting for someone,
and in this case me, to notice.
I want you to imagine you could have written
this poem, even rue the fact that you didn’t,
and still be glad that someone did.

Lovely! Recently I worked and re-worked a short piece of prose, and when I showed it to my friend Brook for the third time(highly pleased with myself), she said,"You took all the spontaneity out of it." There IS a fine line! Nice job, Tom.