I didn't know any poets before pursuing my MFA degree, but at Stonecoast, I quickly got to know many. It was through poets – individuals I liked and listened to, talking about their craft – that I learned to appreciate poetry; so much so that I now begin every nonfiction class I teach with a poem. Ruth Foley was at Stonecoast while I was there, but I really got to "know" Ruth after the MFA, connecting on social media, through mutual writing friends, and alumni updates. (I think I developed a little crush on her with her series of posts about weight loss at her blog Five Things,) Ruth is managing editor at Cider Press Review, a member of the writing faculty at Wheaton College (Massachusetts), and teaches workshops at The Barred Owl Retreat. Her poems appear in many places, including Rattle, River Styx, The Bellingham Review, Sweet, and Bluestem, and her new chapbook, Dear Turquoise, is available from Dancing Girl Press. 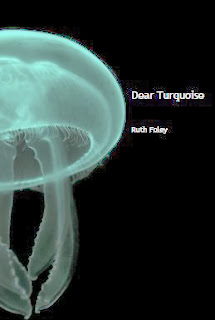 I have never intentionally begun work on a series of linked poems, but three times, they have begun work on me.  Each time, I found the experience to be a little like possession—I stare off into space a lot, have trouble getting my other work done, and babble endlessly without making much sense.

As a poet, I'm used to brief possessions, a poem taking me over until it's finished with me, but when it becomes clear that I'm working on not a single poem but a series, I've learned to go along for the ride. A friend told me recently that he's begun to apply a rule he learned in aikido: it is best not to try to stop a powerful force. If you're lucky, you might be able to direct it, but if you try to get in its way, you're in for a flattening.

An individual poem is, in some ways, easy to handle. It's almost always small enough for me to keep in my head, for one thing, which means I can walk away from it once I have a workable draft. I'll go make dinner, walk the dogs, go for a run, take a shower—almost any activity will suffice—all the while turning the possibilities over in my mind. I'll make a mental list of rhyming words; I'll spend some time trying to figure out the right texture of an object I'm describing, the qualities of a specific tone I'm looking to capture, or looking up variations of color names; I'll test out rhythms and line breaks; I'll work out the details of a metaphor. Any aspect of a single poem is available to me at this point, largely because the form is compact, easily contained.

A series, however, isn't so compliant. The poems in a series are likely to take on multiple angles. Some of them might be free-verse, while others are in a received or nonce form. They can use different perspectives and speakers, different language, different tones. Though related in theme, their specific topics often vary. Writing a series is an opportunity to explore a topic in depth, and because of that, there's often no time at all between my finishing a draft of one poem and beginning work on a brand new one. Sometimes, I finish a draft and believe—rightly or wrongly—that I've made it through the generative stage of the series-writing process. Sometimes, I finish a draft knowing there are three more poems lined up behind it, and maybe more behind those.

When a series takes me hostage, often I can do nothing else. I spend all of my free time—and some time that isn't technically free—mulling ideas, thinking about the last poem or the next, wondering when it will be finished with me. I know that eventually I'll have to sort through what I've written, discard the redundant poems in favor of ones that handle their particular aspect of the topic more successfully, and revise the promising poems, but when the series is in control, there's no point in worrying about any of those tasks.

Thus, my advice for living with the creative stage of a series: just go with it.

As with individual poems, when a series is finished with me, I know it. When this happens, I often find myself taking a brief break from poetry, sometimes from literary endeavor altogether—I'll read a crime novel, maybe, or watch some terrible television. Eventually, I start to wonder, What exactly am I going to do with all these poems I just wrote?

While one of poetry's sad realities is its limited market, that is also one of its advantages, as poets can choose between submitting a series of poems individually or together to traditional print literary journals, to online journals and poetry websites, and as part of a longer collection; and we also sometimes have the option of self-publishing, be it online or in chapbook form (though publishing a full-length collection through a vanity press still carries a stigma, and often rightly so). This means that any of my series could appear as individual pieces in journals, as chapbooks, or as part of a larger collection.

For me, the right method of publication for each series I have written so far has been different. The first is a set of what I came to call "the infidelity poems"—they felt personal and real despite being fictional. While they might have made a good chapbook, they also risked becoming overwhelming when read as a whole. For that reason, I decided to send them out individually, where most of them eventually found homes in journals.

The second is a series of poems inspired by the Universal monster movies of the 1930s and '40s. I became obsessed for a time with the archetypes—the mad scientist, the specific visions of some of the monsters, the villagers—developed in those films, and with the actors who helped create them. This is, in some ways, the most complicated of my series, because it's most at risk for misinterpretation. They're not monster poems or Halloween poems, but poems about what it means to be human; and for two years I was unable to decide what to do with them. Some ended up in journals, but because so many of them seem to belong surrounded by others in the series, I eventually decided to put them together myself into a chapbook called Creature Feature, a process I'm undertaking right now.

The final series is difficult for other reasons. Styled as a series of letters written to my cousin Turquoise after it became clear she would not win her battle with liver cancer, these poems are deeply personal. While I've included a small handful of them in the chapbook  Dear Turquoise (from Dancing Girl Press), it felt to me that collecting them as a whole might become overwhelming for a reader. In fact, I was reluctant to send them to journals, even in small batches. There is no gap in these poems between the "speaker" and the poet—both are very clearly me, the poet, and the subject is very clearly my grief. It was important to me that I find the perfect way of putting these poems out into the world—I kept saying that I needed to do right by these poems, because publishing them in the wrong way would cheapen them.

A few months ago, I realized that the poems could serve as thematic anchors for a longer collection, so although they could certainly fill a dedicated section of my book-length manuscript, I've chosen to weave them throughout as guideposts along a larger route through the book. There, they feel settled, at home, honored. Will a wise editor agree with me? That remains to be seen.

I'm comfortable with my decisions about the three series that so far have come to me. Working with a series—both the writing and the publishing options—can teach us more about who we are as poets and the place we want our work to take readers.

Note from Lisa:  You can watch a video of Ruth reading one of the Dear Turquoise poems (and 2 others) at the Extract(s) site. Two of her monster movie poems ("Dear Dr. Griffin" and "Dear Ardath Bey") are up at Forge.