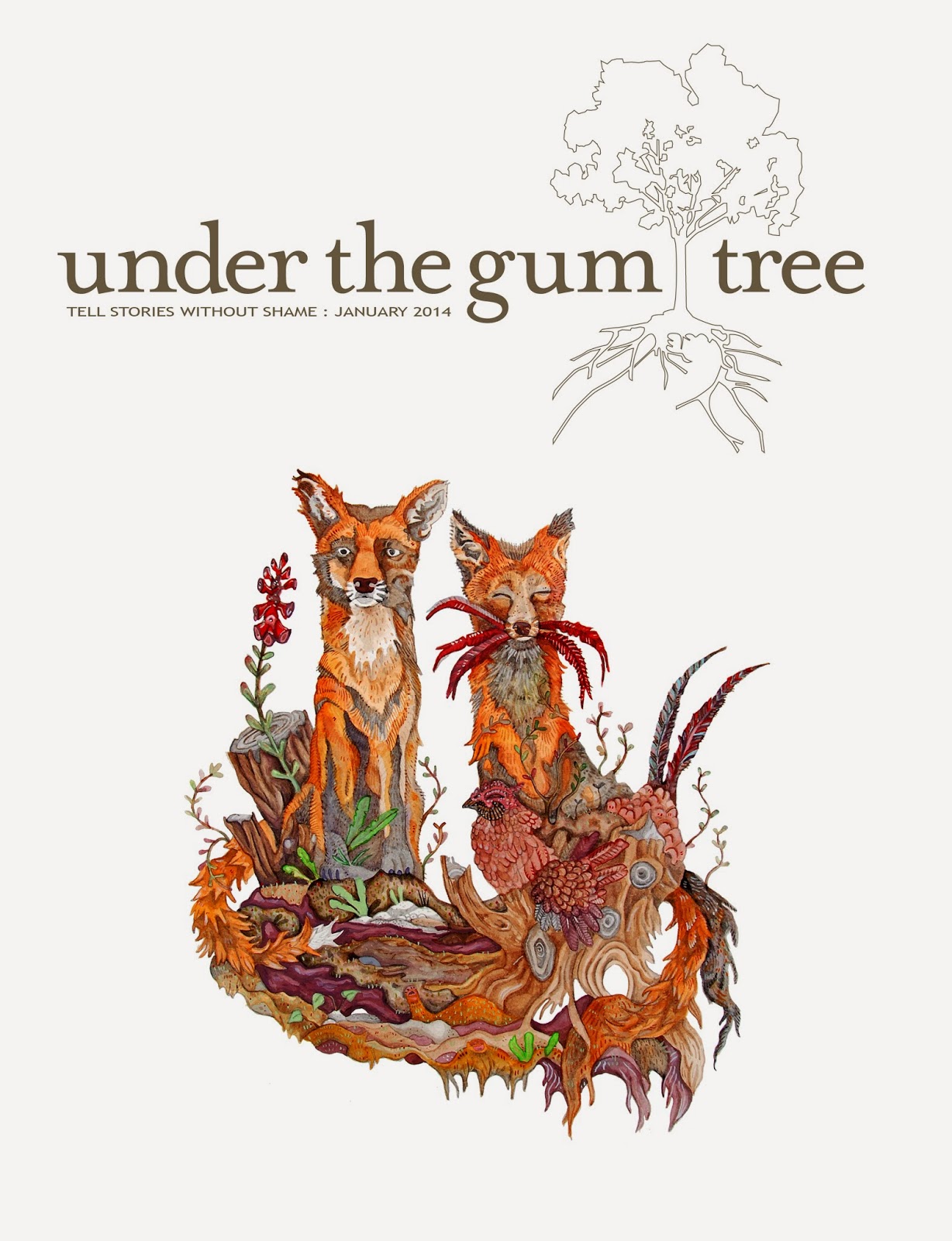 Sometimes I envy fiction writers and poets their riches in the literary journal jungle – the vast majority of journals (print and online) publish only, or mostly, fiction and poetry. Of those that do publish creative nonfiction, there is usually a low ratio of nonfiction to fiction/poetry. Until recently too, there were few journals that published only creative nonfiction. That's changing, and to my mind, one of the loveliest newer nonfiction-only entrants is Under The Gum Tree, which also features art alongside the prose, in both a print and digital format.

I am so excited to have my narrative essay, "Down at the Diner," included in UTGT's January 2014 issue. I'd admired the writing in the issues I'd already read (they've published 10 thus far); I was impressed by what a few of their published writers had said about the care shown by UTGT's editorial and production staff; and – not a small reason—I still love a printed product! I was also impressed by the exquisite art and visual design. So I asked publisher and editor Janna Marlies Maron if she would answer my questions about how she and her team make it shine. She not only said yes, but offered to gift a one-year digital subscription to one of my blog readers (see note at end).

Q.  As a nonfiction writer, I'm thrilled when a journal dedicates itself to nonfiction prose. And to have CNF featured alongside beautiful art is a special treat. What made you decide to focus the journal exclusively on these two forms of expression?

A. As a writer, my own work is in the creative nonfiction genre, so I’m partial. I also have a strong belief in the power of personal storytelling, and the “me too” experience that happens when writers share stories with an audience. There is something about the courage it takes to be vulnerable that creates a special and authentic connection between a storytellers and their audience.

In addition to my philosophy on personal storytelling, my professional background is in magazine publishing. So when I decided to start a literary magazine, one thing I knew from the outset is that it would be full-color and glossy in print, which is not something you usually see from literary journals. The decision to include art was largely based on that – if I was going to produce a full-color, glossy magazine, I wanted to make the most of that medium.

In my former role as a magazine editor, I longed to give a lot of space to photography, because full-page and full-spread photos are so stunning in print. But, when you work for a magazine driven by ad sales, you often have to make hard decisions about editorial space. So right away I knew I wanted to include a photo essay in every issue and that I would give as much room to it as I wanted!

We started including visual art sort of by accident. The art in the first several issues was all photography. Natana Prudhomme (who designed the logo and layout template and launched the magazine with me back in August 2011) is a painter, and I wanted to feature her work, which we did in the October 2012 issue, also our 1-year anniversary issue. Since then we have been featuring both photography and visual artists in each issue.

Q.  The animal artwork on the cover, the inside opening pages and ending pages, by Jane Garret Ryder is stunning – bold colors in a sea of stark white. And the arresting black-and-white photo essay in the center of the journal by Stephen Sheffield, seems to tell a story with words even though no words are present. Please tell me about choosing these artists/works, and how they complement the prose.
A. I have to credit Aimee Steffen Taber, the magazine’s designer with the artwork in this issue. Aimee is new to the UTGT team, taking over this issue from Natana.  Finding artists and photographers to feature has been one of the biggest challenges because, unlike writers who are often accustomed to submitting work if they want to get published, I don’t think the visual arts world really functions that way. So I have solicited most of the artwork we have published.

When Aimee took over as artistic director, one thing I wanted to turn over to that position was curating the artwork and I think she’s done a superb job. Jane Garrett Ryder is someone that Aimee has worked with previously.

The photo essay, however, came to us at the recommendation of Jason Landry, who runs an art gallery in Boston and whose photography is in Under the Gum Tree issue 9.


We aren’t necessarily looking for art that compliments the prose, rather we look for work that creates a visual story of some kind. If anything we are often keeping the visual elements of each issue in step with the seasons, which is partly why black and white photo essays were used in both the October 2013 and January 2014 issues – they convey a more mellow and contemplative mood that we often associate with the typical grayer and shorter days of winter.

Q.  I was struck by the diverse pieces in the January issue; such different, distinct voices, and yet it seemed this way to me, all were addressing some aspect of loss. I wonder if that was intentional or happened organically?

A. I love that you find diversity in this issue. The authors are—unintentionally—all female and, to be frank, as editor and publisher I’m constantly worrying about diversity: are we representing a spectrum of age, ethnicity, and gender?  But then the stories often speak for themselves, because I see diversity in experience even among writers who are the same gender or ethnicity.

We read and make decisions to accept or decline blindly. So to answer your question, it happens mostly organically. I say mostly only because there are times where, for example, we have accepted more than one piece about, say, dealing with mental illness, and we make the editorial decision to not publish both pieces in the same issue. The goal with those kinds of decisions is to create that diverse reading experience that you’re describing.

Q.  As a writer and reader who grew up on print, I am in love with the slick, thick paper stock, the heft, the physicality of UTGT, the way the pages, weight, and texture all contribute to the reading experience (and how great my piece looks in it!). Since you also present the journal in digital form, what keeps you publishing the print edition (and oh, please don't ever stop!)?

A. It’s interesting you ask about the print version because when I launched UTGT I thought for sure people would subscribe to the digital since it’s so much less costly (digital subscriptions are $2/mo, whereas print subscriptions are $7/mo). But I have found the opposite to be true–people love the print, and I think it has to do with the quality of our printing. We are, I hope, unlike many literary journals in that we do a full-color, glossy magazine–it’s really more like a coffee table book than a magazine.

What keeps me publishing print editions? Technology. Really, the only reason I publish in print is that there are tools allowing me to do it. I use a print-on-demand option, so the print edition is only printed for subscribers or when someone purchases an individual hard copy. I wouldn’t be able to do it otherwise.

Q.  Aside from the traditionally referenced recommendations about reading the journal before submitting and sending only your best, most polished work, have you any submission advice for writers that may be unique to a CNF-only journal?

A. First and foremost, follow submission guidelines to a T! We read blind, and say explicitly in our guidelines that submissions with any identifying information will be automatically declined, and I can’t tell you how many submissions we get with the author’s info right there in the text.

Beyond the logistical aspects of submitting, I believe that CNF is different from other genres in that there’s a personal impetus for the writer to share this particular story. We tell true stories to connect with others through shared experience and to help each other learn and grow. And we look for stories where that comes through in a subtle and skillfully crafted way. We don’t want to be hit over the head with a moral or a lesson learned, but we do want to know why it’s important that the author share this story with the world, and how that sharing will benefit the reader–even if it is in a very small way.

Note:  To win a one-year digital subscription to Under the Gum Tree, please leave a comment here on this post by midnight on Sunday, February 9 (and be sure we have a way to contact you). The winner will be announced here the next day.

Also:  If you are headed to the AWP conference in Seattle, stop by table #U15 and say hi to the UTGT folks!
Posted by Lisa Romeo at 3:57 PM

The artwork is just stunning. Is this available in Canada?

Great interview, Lisa. all the questions asked are the same ones I had floating around when I first looked at this magazine on line. It is a joy to see creative nonfiction coming up more in the print world. Thanks for this interesting Q&A.

How exciting to hear about Under The Gum Tree for the first time! Wonderful interview! ~Erin

Terrific interview, Lisa, and I agree - Under the Gum Tree is one of my favorite journals because of the quality of the writing and the beauty of the journal itself. Thank you, Ms. Maron, for being here but mostly for Under the Gum Tree.

what amazing cover art! i'm so interested to learn more about this publication.

thanks for the opportunity!