Note:  Because the practice of personal essay writing, submission, acceptance, payment, and publication so rarely occurs in such a quick, smooth, seamless, and positive way; and because writers are more likely to sound off about agonizing rewrites, multiple submissions, stalled payments, and postponed publication, I offer this story. Now, let's hope that by telling it, I'm not tempting fate, inviting the future wrath of the fickle writing and freelancing gods.

In February of this year, on a Tuesday morning following a two-week blitz of non-stop work, including weekends, I wanted nothing more than to crawl back into bed after my son left for school. I sat at the kitchen counter in my bathrobe, counting down the minutes; but then I learned that overnight a certain celebrity had died – and that was the end of my going back to bed. 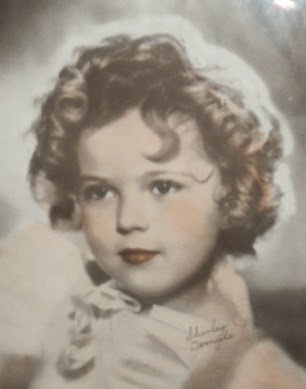 I knew, without question, I had to write an essay about that dead celebrity – and about my mother, who had loved that star. A couple of hours later, the essay was on its way to editors, a week later it sold, a month later I approved two minor edits and provided photos, two months later I had a check in hand, and two weeks ago, I opened the magazine to see a two-page spread, gloriously laid out with my photos.

Except for when I was working a couple days a week as a daily editor for a website, I've rarely conceived, written, revised, edited, proofread, and submitted anything so quickly. In fact, when I teach personal essay writing, I emphasize the good that usually comes from letting ideas percolate, allowing early drafts to marinate; from slowing down, thinking more, spending enough time researching media markets -- and then, budgeting time to reconsider, regroup – rewrite if necessary.

And I believe all of that, and I do all of that. But not all the time.

Once in a while, all that's needed is this: something happens, the brain perks up, memories ignite, and I write, seemingly without any choice in the matter. Sometimes, I realize I've been writing that essay for a long time already, storing it away, waiting until the time is right. Then, like a sculptor who intuitively understands that the statue is already within the marble and his only job is to chip away until it emerges, I sit and type and somehow I find that story, already lurking, fully formed, or nearly so.

That essay I wrote on that February morning was there all along. And now it's in the world, in the June issue of Inside Jersey magazine (and also on the NJ.com website, here). 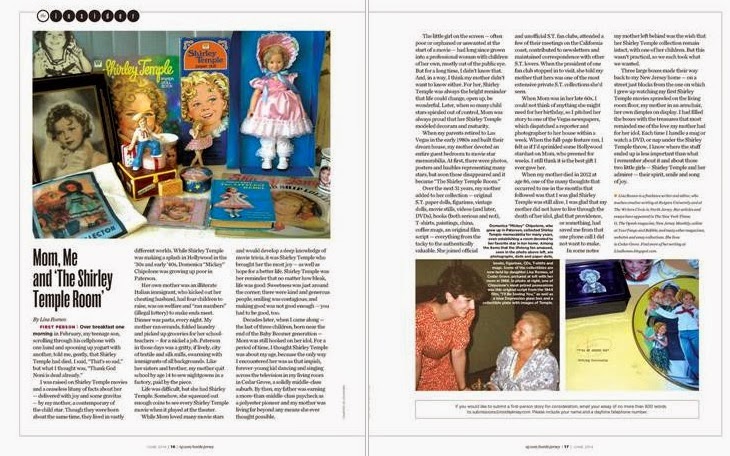 In a class the other day, someone asked me when I first got the idea, and I realized something else: on a long list of possible essay ideas I'd once created in a writing class in the mid-1990s, I'd scribbled, "Mom and her love of Shirley Temple." (Side note: never toss out lists of writing ideas!) The death of Shirley Temple, nearly two years after my mother's death, and only weeks after I'd unpacked some of her treasured movie memorabilia, unlocked that essay.

I suppose I could have written some version of it 18 years ago, or eight years, or five years ago. That would have been a very different essay of course, and perhaps my only regret is that then my mother would have read it, and probably framed it, and then, finally, I would have been part of her Shirley Temple Room.

Come to think of it, I still am.

It's funny....they're ready to come out when they're ready, no sooner. I had the same experience. I wrote an essay 10 days ago, submitted it, got an acceptance the following day and I got the check today. Some need to percolate a long time, some don't. Going over to read it now.

Congratulations. Yes, sometimes the magic is there.

This is so true. Sometimes words flow onto the page and the essay writes itself.

I definitely agree with letting things sit and let your mind work while doing other things.

Wonderful essay about ST and your mother, and a great post about the process of writing!

Inspirational. I love your site. You have such energy.
Coral Jewell (Allyson Latta's student)

Thanks, folks. I appreciate your reading and comments. There's something new to learn about writing with every piece, I've found.

Coral - Thanks - I will re-read your comment on days when I fear all energy has abandoned me!

Great story--and great essay--what a gift to have an essay come to you whole like that, but of course it wouldn't have without all those years of hard work wresting with more wily subject matter, don't you think?

Yes, Andrea, I think that's partly so. The more we write on complex matters, I guess we develop "chops" of a sort. But when they happen like this, I do think it's also a gift from the universe.

COngratulations! It's so great to read a this-actually-works story about writing. : ) And I agree with you; we're always writing, even when we're not writing.

Congratulations on the publication, Lisa, and thanks for sharing both the essay (and its backstory) with us.

Oh, Drew - I believe that! The *writer's brain* is churning away always; when we're doing the laundry, driving (my favorite!), even sleeping!

Erika, thanks for linking back from your blog too! Always love it when your readers find their way here.