The Odd Timing of an Essay about Good Timing

Earlier this week, I talked here about why I hadn't written a Mother's Day essay this year. What I didn't say is that I had written something about my mother late last year, which was published, coincidentally, just before Mother's Day, in a new collection. I didn't think of it as a Mother's Day essay, and I still don't.

The timing, however, is interesting, as the piece is titled "All in Good Timing," and pivots on something my mother taught me that's applicable to so many areas of life—the kitchen, workplace, family life, even the bedroom: Timing is everything (though she never said it quite that way).

She taught me that strategically timing requests, demands, suggestions, and advice, will skyrocket your chances of success. In the essay, Mom's own impeccable timing is on display, as well as her timing advice for me. 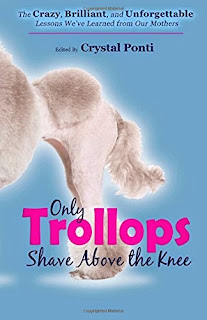 Here's an excerpt from the middle of the piece, which appears in Only Trollops Shave Above the Knee: The Crazy, Brilliant, and Unforgettable Lessons We've Learned From Our Mothers.


"…What she had to teach me about timing had more to do with timing what we can control.

Besotted with horses practically before I could talk, my pleas for a pony, from age 10 to 13, only made my father smirk (Are you crazy? Where would we put a pony? Do you think I'm made of money?). But Mom was on my side (and knew we could afford it). She told me, with a wink, to drop it, for a while.

Then I signed up for a summer acting camp that my father had found and supposedly vetted, one that cost a bundle and was such a bust, I left, along with dozens of kids, on the first day. The parents would all wind up in small claims court in September; but I arrived home in early July downtrodden, a vacant summer sprawling ahead.

That first night home, while eating out, I asked for a dog. Both said no, but when my father went to the men's room, Mom leaned in.

One horse turned into five, into 10 years on the horse show circuit, into blue ribbons, into my parents both beaming from the bleachers.

When I was 24 and my on-again, off-again boyfriend…"

I'll leave it there. Suffice to say, Mom's advice worked that time too (he's now a husband of 27 years).
Posted by Lisa Romeo at 8:30 AM

Speaking of timing, just today I received this book as a gift! I can't wait to read your piece, Lisa.

Nice post, Lisa! I really enjoyed your essay (I'm a horse person too!) and am proud to share the pages with you and the other authors.
~Julia