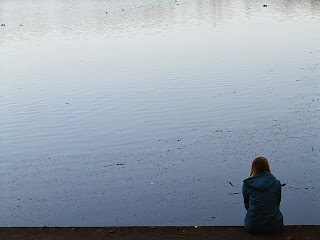 Sometimes an essay or piece of memoir begins in my head as a scrap of something that will not quiet--a phrase, a bit of remembered conversation, a line of lyrics. Like this one, a 1960s tidbit.

My boyfriend's back and you're gonna be in trouble.

That line circled my brain a few years ago, insisting that I write…something—in response to news I heard about my first real boyfriend. How the lyric connected to our story, or to my reaction to his news, was a mystery.

There it was, an earworm, a prod, that wonderful awful feeling as I'm drifting off to sleep or when just waking up, that says, Hey, you! Get out of bed, start writing.

Only, as I began to write, I heard the lyric differently, altered.

Your boyfriend's back and you're gonna be sorry.

Over the next few months, the piece took shape, fell apart. I put it away, pulled it out again. Pushed it aside again. Let it marinate. Let myself figure out what I had to say. Fiddled with it again. Forgot it for months. Tried again.

Then a few things happened.

First, I asked a half dozen readers for input; not my usual writer friends, but students in the MFA course I was teaching last fall. As a way of sharing in the psychic pain of their first graduate workshop experience, I invited them to comment on my draft.

Next, I realized it wasn't only about an old boyfriend, but about how he helped me understand things—some then, more later—about romance, love, sex, kindness, passionate hobbies, and eventually, even a little about mothering teenage sons.

Then, when the piece, eventually titled, "Your Boyfriend's Back," was accepted for the Spring 2015 issue of Front Porch Journal, smart editors had some thoughtful questions and intelligent revision suggestions.

Here's a very short excerpt of the longish piece:

...I tried to think about what Joe would look like now, and compared that to the tiny, poorly focused photograph in the magazine of him on a bike, wearing a helmet. Perhaps it wasn’t my Joe. But I didn't think M____ was such a common surname. And the age was right. The Joe I remembered had not been athletic. Yes, his arms always felt strong around me, and even then, he’d ridden his bicycle for miles, but a triathlete? But then, I hadn't seen Joe in decades. So much can change...

I'd love it if you would visit the journal and read the full piece.

Now, like all writers I suppose, in my head, I am circling another scrap of …something.

Somehow, hearing about your process gives me hope for those pieces I've put away for months now, that still poke at my consciousness from time to time. So many of them I believe will come to something but it makes me less panicky about when that will happen as I read about this essay. Congratulations!

Process is one of my favorite things--fun to read about yours. I look forward to reading the whole essay.

Thanks, Kario and Cynthia. Sometimes things get filed and nothing happens, but when the scrap comes alive, it's bliss.